We Returned to Greece and We Are Here to Stay

We recently launched WorkInTech, a platform that aims to offer the possibility to anyone who wants to return to Greece to work at one of the most innovative tech companies of the country. Founders and executives of tech companies that participate in the initiative talk about the opportunities that the Greek business scene offers and about  Greece’s chance to win back the talent it lost during the years of the financial crisis. 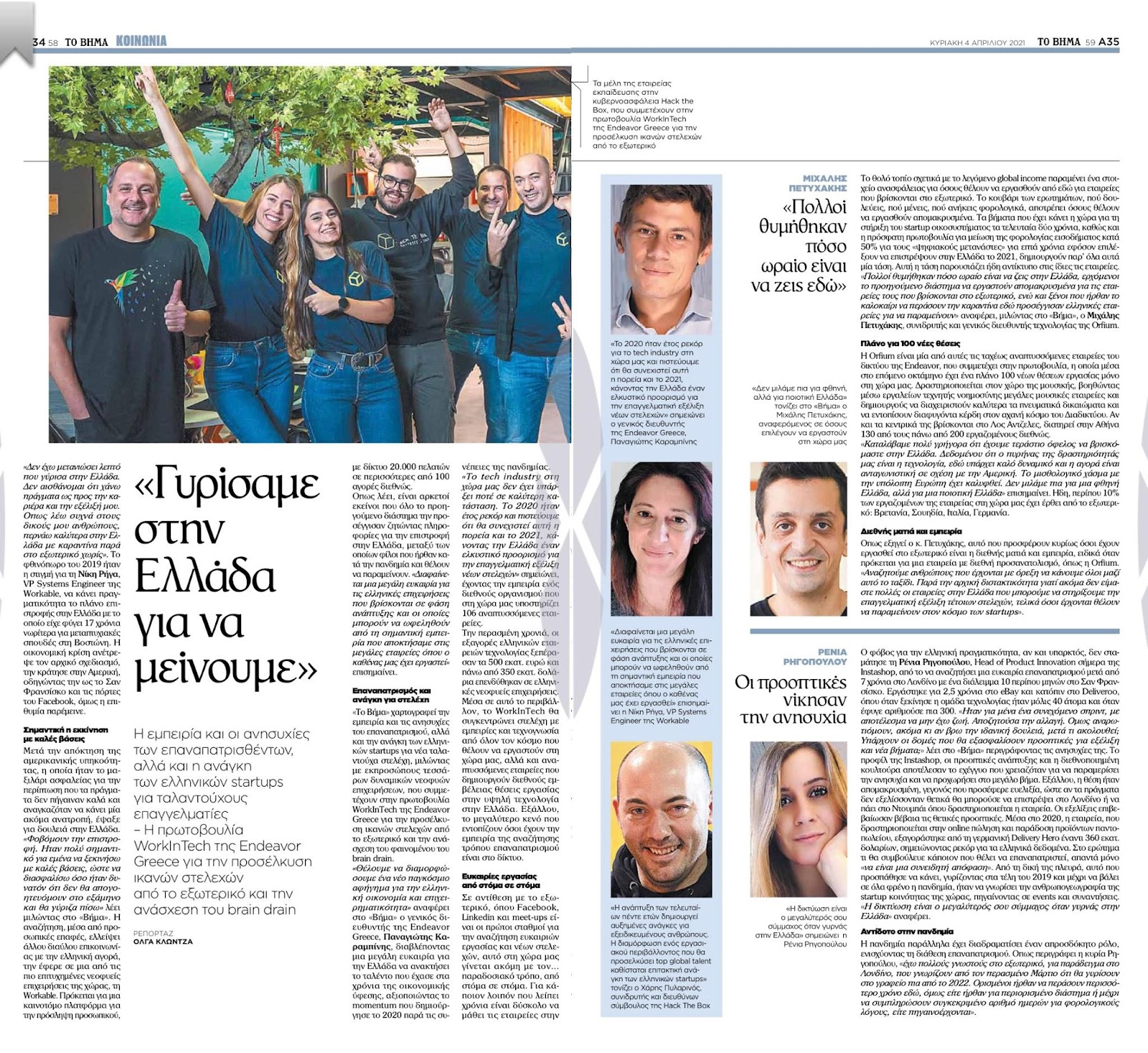 “Not for one moment have I regretted coming back to Greece. I do not feel that I have missed important things regarding my career or my development. I often tell my beloved ones, in spite of the lockdown I have a better time in Greece than living in a foreign country where there is no lockdown.” The fall of 2019 was the right time for Niky Riga, VP Systems Engineer at Workable, to carry out her plan to come back to Greece. She had left 17 years ago to pursue her postgraduate studies in Boston. The financial crisis upended her initial plans, prolonged her stay in the USA, led her to San Francisco and at the door of Facebook. However, her desire to come back never died out.

“Greece is no longer a cheap country, but a country offering quality,” Mr. Michalis Petychakis points out, Co-founder and Chief Technology Officer at Orfium.

After acquiring the American citizenship, which was the safety cushion in case things did not work out and she had to change her plans once again, she looked for a job in Greece. “I was afraid of coming back. It was very important for me to make a good start so as to make sure that I would not be disappointed in six months and would have to go back again,” she says when talking to To Vima newspaper. Her search, performed through personal contacts as she lacked another link with the Greek market, led her to Workable, one of the most successful startups in our country. It is an innovative platform for hiring personnel and has built a network of 20,000 clients in more that 100 markets worldwide.

According to Niky Riga, quite a large number of people contacted her in the last months to ask about her experience of coming back to Greece. Among them, there were friends who came back during the pandemic and they realized they wanted to stay.

“There emerges a great opportunity for the Greek companies that undergo a growth phase, as they can benefit greatly from the significant experience we have gained in the big companies we have worked,” Niky Riga points out, VP Systems Engineer, Workable.

To Vima maps out the experiences and the concerns arising from the issue of repatriation, as well as the Greek startups’ urgent need for young talented executives. It presents the views of representatives of four dynamic startups, that participate in Endeavor Greece’s WorkInTech initiative, which aims to attract talented executives from abroad that could reverse the brain drain.

A New Narrative for the Greek Entrepreneurship

“We would like to shape a new global narrative for the Greek economy and entrepreneurship,” Panagiotis Karampinis points out, Managing Director of Endeavor Greece, who foresees a great opportunity for Greece to regain the talent it lost in the years of the financial crisis by leveraging the momentum it gained in 2020 in spite of the repercussions of the pandemic.

“Tech industry has never been at a better state in our country. 2020 was a record year, and it is our belief that this course will continue in 2021 making Greece an attractive destination for the professional development of young executives,” stated Mr. Panagiotis Karampinis, Managing Director, Endeavor Greece.

Mr. Karampins has the experience of an international organization that supports 106 fast-growing companies in our country. Last year, acquisitions of Greek tech companies exceeded €500 million and more than $350 million were invested in Greek startups.

In this environment, WorkInTech will bring together both executives with experience and know-how from all over the world who wish to work in our country, and fast-growing companies that generate global-level high-tech jobs in Greece. In any case, the greatest deficit people pinpoint when it comes to repatriation is the network.

“The growth of the past five years has resulted in a growing need of specialized executives, capable of supporting the companies to implement their strategic goals. The creation of a working environment that attracts top global talent is imperative for the Greek startups,” Haris Pylarinos, Co-founder and Managing Director, Hack the Box.

Contrary to what happens abroad, where Facebook, LinkedIn and meet-ups are the first steps for someone who is looking for job opportunities and new executives, in our country things still happen… in a traditional way, that is, by word of mouth. And for somebody who has lived abroad for several years it is difficult to learn about new companies in Greece, let alone about new openings.

“Networking is your most important ally when you come back to Greece,”  Renia Rigopoulou says, Head of Product Innovation, Instashop.

“We are trying to build a dynamic community based on the global brand of Endeavor. Even multinational companies have shown interest in taking part in this effort. We are currently looking for the opportune moment. We would like to have the support of all the companies that can act as a driving force for attracting global-level talent and provide the incentives for repatriation,” Mr. Karampinis says.

You may read here the entire article, which was originally published at To Vima Newspaper.